Many years ago (about 6) I tried a #4 Spey rod, and then a #3 Spey rod, and hated them. They were super soft, ultra-slow, over-flexing rods. I could not see a use for such light Spey rods then, and had remained attached to that belief ever since.

The rods I tried were long, traditional Spey rods - both around 14 ft, and this combination of slow length, and light line size produced an insipid rod action that was akin to handling liquid mercury - uncontrollable, uncomfortable and unnecessary. 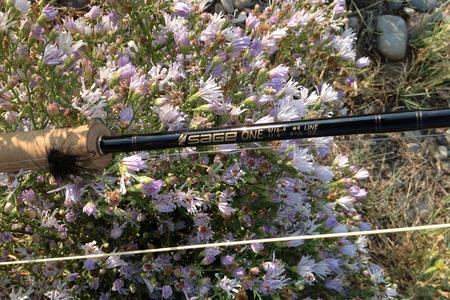 Over the summer I have tried numerous lines on the rod and the ones that load the rod up well (for me)  are the 4/5 AFS head, the 275 Skagit Short (though I tried as much as a 425 Skagit Short on it, and the rod took it so easily), the 29 ft 280 grain Steelhead Scandi shooting head, and the new #4 Scandi Short VersiTip (all RIO lines). The one line that was PERFECT for balance, touch, feel and ease was the #4 Scandi Short VersiTip. I would honestly say that there is nothing, nothing in the Spey casting world that I have ever tried that is so perfectly matched as that 1116-4 ONE Switch rod, with a #4 Scandi Short VersiTip, attached to a 0.024” Powerflex shooting line’

I am not the only one to feel so much awe in such a combination. Very, very reluctantly I let my fishing buddy Mark Bachman fish this on the last morning of my Deschutes trip, and he was ecstatic and vociferous with the pleasure of casting it. A week ago I took this to Virginia to teach a class and fished the Jackson for small local trout, and it was as magnificent for that as well. Very briefly I gave the rod to Doug Lane, owner of Angler’s Lane fly shop to try out, and he also fell instantly in love with it. So be warned; try this rod at your peril, because you will end up buying it – it is too fun and addictive.

A short, light and incredibly powerful #4 small Spey rod – superb for trout, sea trout, grilse, sea run cutties and summer steelhead. I don’t think I have ever found a rod so perfectly balance and such a joy to use. For anyone that likes light, fast and responsive rods, and who is targeting fish between 2 and 10 lbs, it is an absolute must! 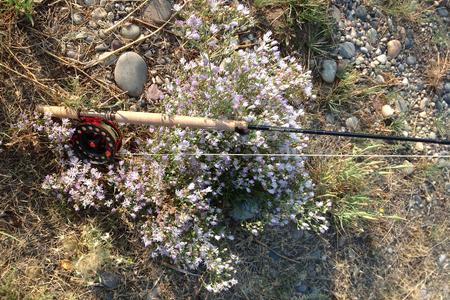 About the same time rod companies started to develop shorter Spey rods that were called “Switch” rods. The idea behind the name is that if you make a two-handed rod short enough and light enough, you could Spey cast with it, and also “switch” to casting it overhead and single handed when needed, or if you didn’t know how to Spey cast. Since those early days Switch rods have really caught on and become a very popular and best-selling rod type.

I had got into Switch rods in a small way, though I really am not a fan of calling them “Switch” rods. To me, they are short Spey rods – designed to be cast with two hands (either overhead, or Spey), and with a side benefit that you could, if you really wanted to, use them single handedly. I started out with a Redington CPX 10’ 6” #5 Switch rod, and then got a Sage Z-axis 11 ft #5 Switch rod. Both these rods are a decent size for living in Idaho and for swinging streamers and soft hackles on the South Fork of the Snake and other surrounding rivers. I liked these shorter, lighter Spey rods, and soon got a range of Switch rods, from the light #5’ to some powerful #8’s.

I have used Switch rods off and on for about 3 years now; fishing them, using them in demos and teaching various clients with them – those that have been interested in lighter, shorter Spey rods. However, despite having a plethora of Switch rods for all conditions and species, I have never really fallen in love with them – until now!

I tried a selection of Sage’s  ONE Switch rods at RIO’s annual sales meeting on the San Juan in New Mexico, and one that absolutely jumped out of my hand was the 11’ 6” 4 weight. Most of the range of ONE Switch rods felt light, well balanced, fast and responsive, but the #4 was mesmerizing. Rarely have I felt so incredibly tuned in and so in touch with a rod as quickly as I did with this little one, and I longed to get it out and fish it.

Since that sales meeting I fished this rod at the expense of my regular 9 ft #5 trout rod everywhere I possibly could, and searched for fishing situations that let me Spey cast and swing a fly, rather than have to go back to my single handed rod and overhead cast. It is fantastic fun to cast and fish with, and reacts beautifully with typical 14 to 16 inch trout on the Idaho and Wyoming rivers I fish. The highlight and biggest surprise of all, however, came on a steelhead trip to the Deschutes in September. The rod is so joyous to cast that I decided to fish it for steelhead on that trip and to hell with the consequences (after all a #4 rod and feisty steelhead in a powerful river like the Deschutes is a pretty dumb idea!).

The rod had absolutely no problem handling the 3 steelhead I hooked (and landed) on it, and though the fish weren’t large, they were typical summer-run Deschutes fish, up to about 7lb in size. When balanced with the right line (more on this in a second) I could easily make 80 ft casts with an incredible lack of effort. This rod really, really likes casting!  .